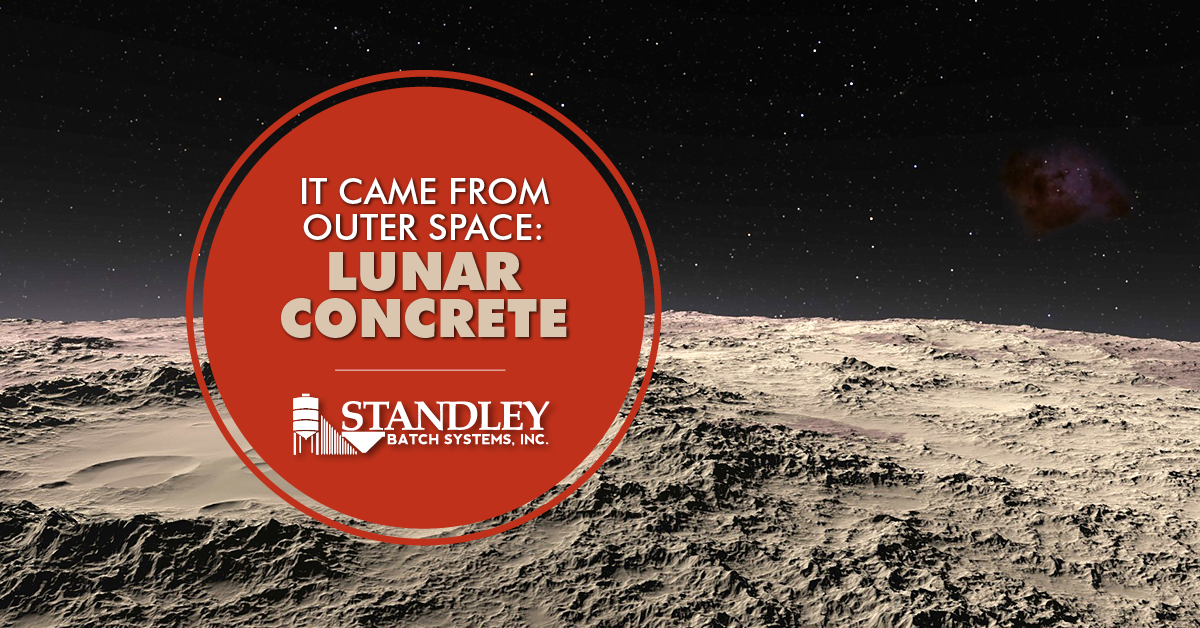 There’s a lot of buzz around our region as our neighbors at Southeast Missouri State University gear up for the solar eclipse happening next week. Cape Girardeau will be in complete darkness at an unusual time: 20 minutes after 1 in the afternoon. Or when the moon will completely block out the sun. Even if you aren’t in the line of totality, many Americans will still have a chance to see a partial solar eclipse. Find the best time for viewing in your area.

While not strictly related to concrete, as engineers, we get excited about all things space. This naturally got us thinking about aggregates and other materials beyond our orbit.

Lunar concrete, mooncrete or lunarcrete – whatever you want to call it – describes a concept aggregate made up from the moon’s regolith. Regolith is a term for the dust, soil and gravel on the surface of the moon and other planets. Lunar soil differs from terrestrial soil chemically. In fact, Earth’s soil is ripe with specifically organic elements. The moon’s soil has no organic makeup, but it does contain a higher titanium percentage than our local soil. The moon’s dust is interesting, though, because of the abundance of meteorite collisions.

There are a few things to consider when it comes to lunar concrete. First, the ultimate goal of the material is to create lunar concrete mixtures for moon base structures. Second, it is really dusty. Dust exists on the moon because meteorites, big and small, constantly smash into the surface. Third, moondust is highly abrasive. In fact, moondust collected during the 1969 Apollo mission caused the seals on its containers to deteriorate. This led to humidity coming into contact with the dust particles, generating rust and compromising the samples.

Before we start building on the moon, we’d first need to test lunarcrete in a variety of applications. From aqueducts to concrete pipes to complex precast systems, testing lunarcrete for endurance and strength in different weather, temperatures and environments is vital before any official use on Earth or other planets.

Still, there’s a lot of interest in moon structures, especially lunar telescopes. The moon’s negligible atmosphere and weak gravity make it an ideal location for a massive telescope about half the length of a football field.

In 2008, NASA astrophysicist Peter Chen spoke of building a large telescope on the moon with a new lunar concrete recipe he and his team created. The sticky batch recipe combined moondust with carbon nanotubes. If astronauts can mainly use materials already on the moon – the premise of Chen’s recipe – to build a telescope, we’d need to send only aluminum from Earth as a surface coat. There are concerns about dust getting on the mirrors with the initial setup of the telescope, but many still see this as a possible design.

Instead of trying to find water on the moon, a 2010 proposal suggested melting sulfur to produce a thermoplastic material for mixing with lunar aggregate. Sulfur is found on the moon in troilite, a rare mineral usually located in meteorites. Because the moon’s atmosphere isn’t dense at all, small meteorites do not burn up as they do when they enter Earth’s atmosphere. This means troilite litters the moon’s surface in the form of dust. With minor heating, sulfur can be extracted from troilite. While this mix design isn’t technically a concrete, once heated and cooled, the dry mixture creates an immediately strong construction component similar to concrete.

What’s the Future of Lunar Concrete?

Of course, there are downsides. Lunarcrete offers little protection from cosmic radiation and is not airtight. And we need more moondust for tests before anything official can be created. There is still quite a bit of interest in the possibilities – even if it seems like Mars is more popular.

Learn something new? Enjoy concrete facts and news? Subscribe to our blog for more articles like this.